She adds turkey sausage to make this side dish into a meal.

Preheat oven to degrees. Cube the turkey sausage. Bring a large saucepan of salted water to a boil Add the macaroni and cook until still slightly al dente, about 10 minutes. Drain, set aside and keep warm. Whisk the eggs in a large bowl until frothy. Combine eggs, Velveeta, butter and 2 cups half-and-half in a large bowl.

Add the warm macaroni, tossing until the cheese has melted and the mixture is smooth. Fold in turkey sausage. Pour the mixture into a buttered 9-byinch casserole or baking dish and bake for about 30 minutes. Remove from the oven and sprinkle the remaining cup of yellow cheddar cheese over the top.

Bake until golden brown on top, about 30 minutes more. Serve hot from the oven. Per serving: In a large saucepan, bring 1 gallon water to a boil. Add macaroni and salt and cook just until the macaroni is done. Drain, then return macaroni to the pot and stir in cream and cheddar. Cook on low heat for 10 minutes, then taste and season with salt and pepper.

Bring a large pot of water to boil over high heat and season with salt. Add pasta and cook until just tender, about 12 minutes or according to package instructions. Drain well in a colander without rinsing. Transfer the pasta to a large bowl.

Add half the cheddar, Monterey Jack and Parmesan, reserving the rest for the top. Add heavy cream and stir to combine. They were smoky, seasoned, tender, and flavorful.

They were gone before you knew it. The sausage we had is not homemade, but it's a close second being ordered from nearby Czech sausage company, Patak Meats. 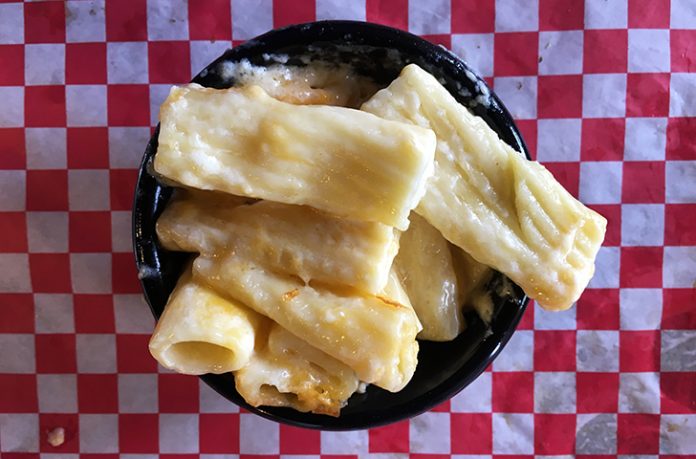 It wasn't too greasy and had great flavor. The pulled pork was also cooked perfectly. It didn't have a ton of smoke flavor, but it was juicy and tender. One thing to note about the pulled pork is the extra step they take of wrapping in plastic wrap as soon as the pulled pork is done. This allows the meat to rest, redistributing all of the flavorful juices, while also keeping it tender. When it's ready to serve, it's like it just got out of the smoker. The brisket we had was solid as well.