Be sure to upgrade yours as often as possible! Upgrade them into seasoned soldiers: Triple or Infinite Bullets, Electric Discharges and more! We are very excited about the ways the Apple Watch can expand and support the gaming experience of Brothers in Arms 3. Therefore, we're happy to bring players a dedicated companion app meant to deliver important game information directly to their wrist.

Claim rewards, sign up for events, check weapon info, and more! Terms of Use: Various game performance improvements, optimizations and bug fixes. Despite the numerous glitches I had with this game when it came out, it has gotten even worse than when it was new! The introduction of multiplayer was awesome but with the recent update: I don't have the time or money to buy all the best guns and because of the last update it is no longer fun or fair. Whether it is a bad connection to the server which I didn't have an issue with before this update , glitching through stairs, or opponents having overpowered weapons and buffs, this game frustrates me every time I play!

Single player is not as bad but the story line is crap.

Also, single player is way to easy and when your "brothers" die in a mission they don't die all together, which contradicts to the plot at the beginning of the game. Guns are way too expensive and only people with good money to throw away seem to be good on multiplayer since the have so many buffs. This game used to be fun, but now it is boring on single player and annoying in multiplayer.

I understand that multiplayer is new and I think it will get better as the tweak it a little. By the way, the whole energy system is dumb. They make you wait for it to refill before you can do more campaign and multiplayer. They should get arid of it entirely.

I could go on forever about problems in this game. However, I haven't lost all hope in it yet. Has a lot of promise too it. Here's to a good update! The campaign levels are good, I like the game a lot and keeps me entertained when I don't have much other stuff to do. You are their commander and they are entrusting their lives to you, a weight expertly transferred to your shoulders by Sgt. Baker's cutscenes and voice-overs.

Hell's Highway motivates you strategically and emotionally to be a smart leader, and it's surprisingly engaging to focus on something other than yourself in a first-person shooter.


Battles become even more complex as you take more squads under your command and incorporate machine gun and bazooka units. The former is excellent at suppressing enemies, while the latter can destroy sandbag barriers and elevated enemy positions in houses and towers particularly awesome. As you get the hang of squad command, you'll begin wielding your men as extensions of yourself and moving through battlefields as an elite, coordinated unit.

Taking apart and dispatching a field full of entrenched German units is immensely satisfying, and this feeling of power is what makes Brothers in Arms so rewarding. Despite the focus on squad combat, Hell's Highway demands a strong individual performance from you. Oftentimes you'll be the lone flanking unit, and you'll have to shoot accurately and make smart use of cover to survive.

There are also sections where you go it alone, and you'll have to be nimble to both suppress and flank the Nazis yourself. Fortunately, you are a crack shot and can hit half-exposed German helmets from a substantial distance if you can find enough time to pop your head out and aim down your sights. When you score a particularly impressive shot or throw a well-aimed grenade, the action camera will kick in to highlight your success. 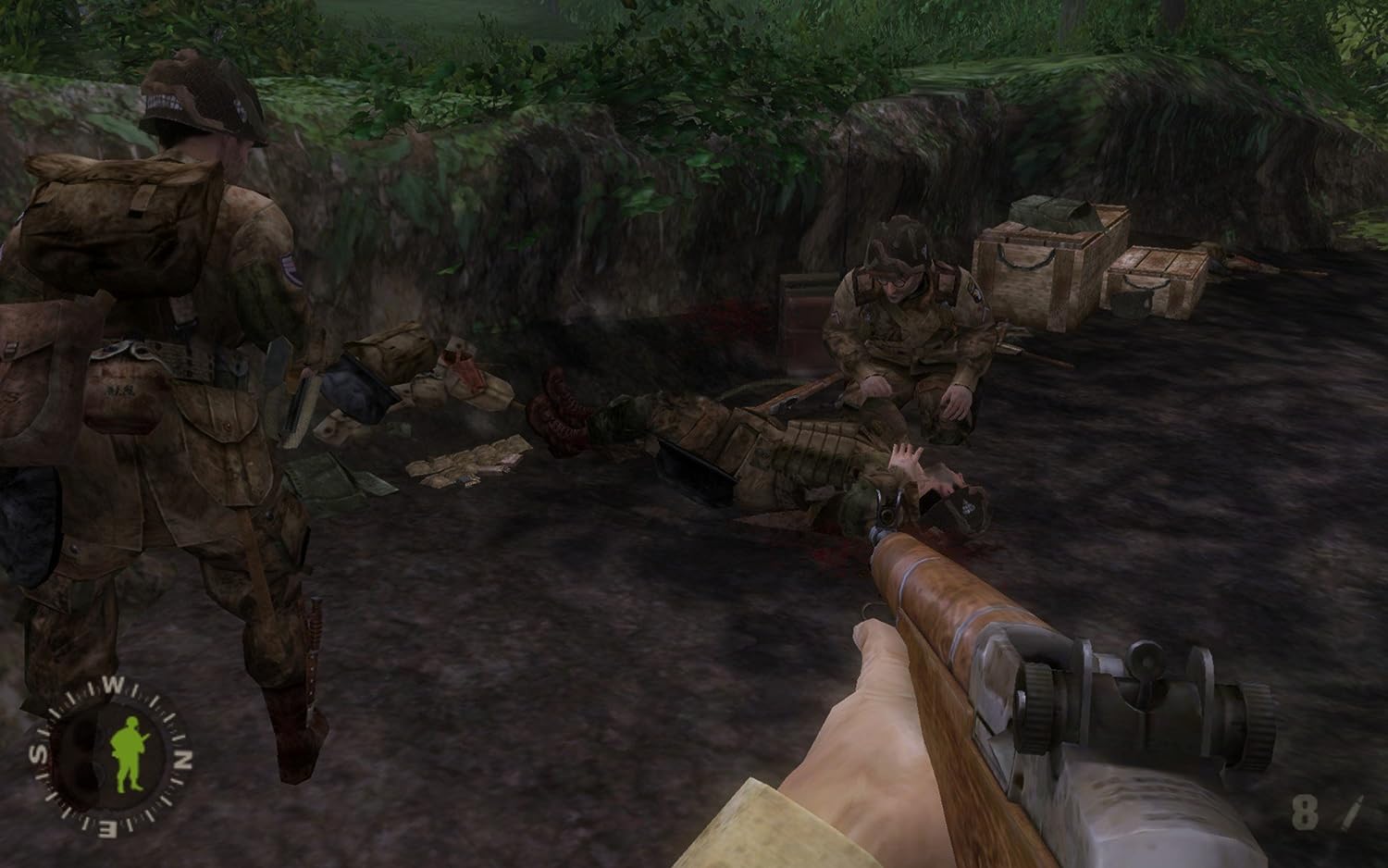 The camera will zoom in on the Germans and the action will slow down dramatically, treating you to a gory display of flying limbs, severed torsos, or burst skulls. It's a bit overblown, but you'll probably be too busy roaring triumphantly to care. The action camera is definitely excessive, whether you revel in it or disable it is up to you.

Realism is abundant throughout the game, though, thanks to the excellent audio and visual design.

Each gun has a variety of unique sounds, and nearby explosions cause your ears to ring, drowning out all other battlefield noise. Bullets smack into cover you've hidden behind and whistle by your head disconcertingly, while tables and fences splinter and break in ways that both sound and look realistic.

Your comrades are also quite detailed, though occasionally their facial textures will load a bit late, leaving you with a blurry, expressionless facsimile that can vitiate any emotional involvement you may feel. As you venture through the Dutch countryside and into more-populated zones, the landscape will change, but the superb level of detail will be constant throughout, only periodically marred by a lackluster texture or two. The different landscapes do have a certain sameness to them, as each tries to allow for squad-based tactics, but on the whole these battlefields provide fantastic arenas for combat.

There are a number of multiplayer maps as well, and each supports up to 20 combatants.

Two teams face off in successive standard capture-the-territory contests, respawning only at the beginning of each round.