Mac in a less than fullscreen environment, there are likely hidden ribbon options off to the right. Of course, there are no visual indications that you're missing anything, so you could be banging your head against the keyboard for a while. Don't worry: Even more tricky?

The icons and items pop on and off quite dynamically in Excel and Word, so you don't just lose the right-most icons, but whichever icons the UI staff at MS felt were least important to them. My only advice? Click the 'maximize' button whenever you feel frustrated. 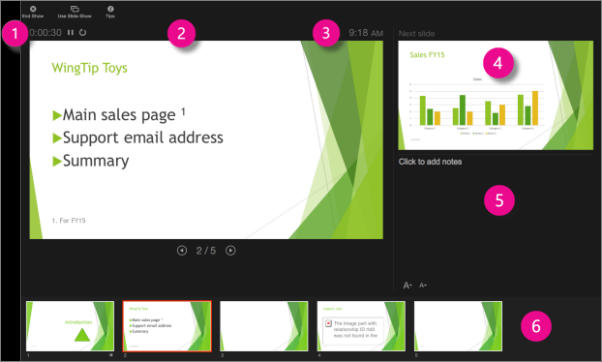 Just don't ask me to explain why the box border selector is in the 'Font' sub-ribbon of the Home ribbon. Thank heavens for Guru's who show the way when Microsoft obfuscates the most important things The presenter screen appears on the TV and the PwrPnt presentation itself appears on the computer.

Shouldn't it be the other way around? I've fiddled with both slide show menus and tried every I can think of to reverse the screens. The swap display button is on the TV and the cursor in on the computer screen. How can I get to see the presenter screen on my computer and have the presentation on the TV? Is there a shortcut key combo for swap display? If you are mirrored, turn off mirroring first, or you it won't show you 2 screens in the 'Set up show Alternately, while you are in the presentation mode, move your mouse pointer to the extreme right of the laptop screen, and it should 'appear' on the left side of the TV screen wiggle it around a bit in case it gets stuck in a corner.

From there you can click the 'switch displays' button. Good luck! With regard to the presenter mode in , I've just run face-first into a new to me problem with it. In , the last version of office we used in house, presenter mode included a nice, sizable sidebar with thumbnails. For something like supertitles for an opera my current challenge , this was exceedingly handy, especially in a show where the performers are prone to some In this latest version, we seem to be restricted to a dock-style bar at the lower edge, collapsing when not moused over.

Has anyone had any luck resizing or even locking that thumbnail bar in place? In order for it to be useful, as the old one was, it would be really handy if it were locked, resizable and multitouch scrollable - all things the old sidebar did well, and things I have had no luck convincing to do for me. I need to be able to type changes into a screen as that screen is displayed on the second monitor. This used to be easy before presenter view. I want the old way of displaying back - or at least make it like the Windows version where I can toggle Presenter View on or off with a checkbox on the ribbon.

If you selected 'display on 2nd monitor', but unselected 'use presenter view', you can edit the slides live on Powerpoint for Windows. I don't believe that the Mac version was ever able to keep the edit screen live while presenting on the other.


I know it's a bit old, but as somebody who is suffering from this problem as well! I thought i needed to chime in and say this is incorrect. This is an old post so I don't know if anyone will see this. The above solution worked, but only within PowerPoint itself. In other words, PowerPoint slides are mirrored on the projector. However, if I cmd-tab to another application the projector is NOT mirroring and I see only the wallpaper for a second monitor even though the display setting in System Preferences is set to mirror. It's like PowerPoint overrides the system preference and turns off mirroring then fakes it by outputting slides to both monitors.

Since I often switch back and forth between apps during a presentation this doesn't work. I've been forced to open my files with Keynote as a workaround.

Any suggestions? Rob - Hopefully you can help me I cannot find a way to reverse it back Any ideas?

Using Presenter View in PowerPoint for PC and Mac

Check the box marked "Manually" to over-ride any timings associated with any of the slides in the presentation. This is a useful alternative to unticking the "After: It does not affect the "On Mouse Click" setting for each slide. An information technology journalist since , David Nield writes about the Web, technology, hardware and software. Share on Facebook.

Using Presenter View in PowerPoint for PC and Mac

Step 1 Select the slide you wish to edit from the thumbnail list on the left-hand side of the PowerPoint interface. Step 2 Click "Transitions" on the ribbon menu at the top of the interface to open the tab containing the "Advance Slide" options, on the right-hand side. Step 3 Untick the option labelled "After: BGG72 Replied on December 11, In reply to tomkludy's post on September 25, Thanks for marking this as the answer.

How satisfied are you with this reply? Thanks for your feedback, it helps us improve the site.

Get to know Presenter view

How satisfied are you with this response? I think I found the answer. Follow the steps below to turn off dual screen display: This site in other languages x.