The most obvious changes when browsing through the new instrument library may seem cosmetic, but are actually fundamental to many designs. Two display layout schemes called 'A' and 'B' are now available to each design by clicking on the two small buttons alongside the minimise button, and you can define which controls appear in each. For instance, the complex 'Kaleidon' synth uses view 'B' for its day-to-day performance controls, while view 'A' requires a x resolution to display more controls when creating new sounds.

On the other hand, 'Blue Matrix' displays all the module and sequencer controls in view 'A', while view 'B' displays an additional modulation matrix with buttons and 35 rotary controls.

While version 3. This finally allows Reaktor designers to create much more radical-looking control surfaces — the new library makes great use of controls grouped into differently coloured compartments, and 'metal', 'wood', and 'weathered' panels are in evidence. Reaktor v4 offers far more flexible incorporation of bitmap graphics into its front panels notice the bas-relief panel edges and tabbed logos in this design , as well as radical new modules like Multi Picture, which is here being used to provide an animated display of multiple modulated delay times.

While the various knobs, sliders, and switches still have a fixed appearance although they are mostly available in three sizes , Multi Picture is a new module that allows 'animations' to be used within your designs, with the animation 'frame' determined by its selected input.

You could use this to recreate Pro 53's keyboard with its keys which seem to depress when receiving MIDI or mouse input , for example, or to import a multi-position sequence of images to create your own design of control knob, analogue meter, or anything else that captures your imagination. This new module is demonstrated in the 'Fusion Reflections' effect see screenshot, above , where each of the various delay taps is shown in a graphical display as a small seed-like blob whose position defines its delay time, and when you modulate the delays, the 'seeds' swirl about.

Other smaller but welcome new graphical features include the List module, which provides three different styles of switch with drop-down text options ideal for selecting sine, square or triangle waveforms, for example. There's also a 'Multi Text' option, which you can use to attach informative notes to each patch, and a new resizeable RGB lamp module with custom colour transitions. Mac users of Reaktor v4 can use OS 9. My own PIII 1GHz PC ran all of the new library ensembles at a CPU load of between 15 and 25 percent with a typical four voices, which would leave plenty over to run some simpler supporting software synths and plug-ins.

However, if you anticipate launching multiple instances of Reaktor, and especially if you desire higher polyphony for big pads, a faster processor would be desirable. The main toolbar has been halved in size by incorporating its second rank of controls into a header bar on the instruments themselves — it makes far more sense to have the mute and solo buttons, MIDI channel, number of voices, and the snapshot name here.

A further space-saving feature is that each instrument now has a minimise button to reduce it to down to just the header bar, which lets you amass a complex collection of instruments and effects in a compact virtual 'rack', and still be able to choose different snapshots, but only display the panels when you need to for editing or performance purposes.

The new Snapshots window lets you manage multiple banks of patches, randomly generate new ones, merge between any pair, and even morph between them, while the new Browser window makes creating new instruments significantly easier. While the right-click menus are still available to PC users, as well as the various main menu options, there's now also a new Browser window that we first saw in NI's Kontakt, which provides much greater flexibility.

It lets you search for audio files, modules, macros, and instruments, and then use drag and drop to add them to your creations. You can also use the Browser to examine the overall structure of any ensemble and its associated sub-assemblies, or to display and alter the wiring of the various instruments and the audio input and output connections. The handling of Snapshots ie. Snapshots can be sorted in various ways, or you can generate new ones randomly, select two snapshots and randomly merge their settings, and even morph between their control positions excluding switches and buttons at a user-defined rate.


There's also a new Snapshot module to provide the same functions inside an Ensemble, with full automation! The list-based sample-mapping windows from Reaktor v3 have been revamped see screenshot, below , and are now supplemented with a graphical editor again from Kontakt , featuring drag-and-drop positioning on the graphic keyboard display, plus velocity- and key-splits.

The new Sample Map Editor is a new option imported from Kontakt, and is much more intuitive to use than the list-based version from Reaktor v3. Apart from the various new modules already mentioned, there are also other newcomers devoted to sound creation and modification. For many musicians the highlight will be the new Grain Cloud Delay module, which builds on the Grain Cloud module first seen in version 3.

This time you can create granular soundscapes in real time, and even freeze live audio. There's a new all-pass one-pole filter with a flat amplitude response and a variable phase shift depending on input frequency, and there are also quite a few new mathematical modules encompassing more advanced functions such as square roots, arcsin inverse sine , and logarithms. However, two related new features greatly simplify the creation of new synths. Many modules in version 3 of Reaktor, such as adders and mixers, were available in two different versions for use either with control or audio signals, but these now appear as a new type of module, the so-called Hybrid modules, which automatically reconfigure themselves depending on how you wire them up, saving you from having to think about which type is which.

Similarly, the new Single Delay replaces the previous Static Delay, Modulation Delay, or Event Delay modules, depending on what type of signal you connect to its input and output. There are lots of clever touches like this. Just as handy are Dynamic modules, which replace the previous multitude of otherwise identical modules featuring two, three, four, six, or eight inputs or outputs with just one — but you can add more inputs or outputs to this module by simply holding down the Ctrl key while dropping a cable on them.

Not only does this streamline the modules menu, it also makes adding extra features to existing designs far less frustrating, as you don't need to completely replace and rewire modules. Various tweaks have also been performed to make life easier — when running Reaktor as a VSTi, for instance, you can now automate the controls, re-size the windows, and launch unlimited instances for multitimbral use.

However, for me the best new feature is the replacement of all the oscillators with new versions based on the improved low-aliasing algorithms first heard in NI's Pro Having explored the new library see the box below I'm well impressed by the results, and when I visited the new web-based User Library, there were already Ensembles available for download, neatly divided into categories for the first time.

While some users may have issues with the new copy-protection system, the benefits of Reaktor v4 outweigh any inconveniences. NI have obviously put a huge amount of work into this upgrade, improving not only the look and feel, but also the sound quality, as well as making it simpler to use. This is no toy for budding synth designers — Reaktor v4 is a polished fourth-generation product. The sound quality matches that of most hardware synths, but Reaktor offers sonic possibilities that stretch beyond what hardware can offer. The new library covers a huge range of sounds, but whereas in previous versions most ensembles had a dozen or less presets, and sometimes covered similar sonic ground, this time the various designers have spent far more time exploring the possibilities.

With up to presets per ensemble, the process of auditioning sounds is much more like it is on a hardware synth, and each instrument is described in some depth in the dedicated page manual. 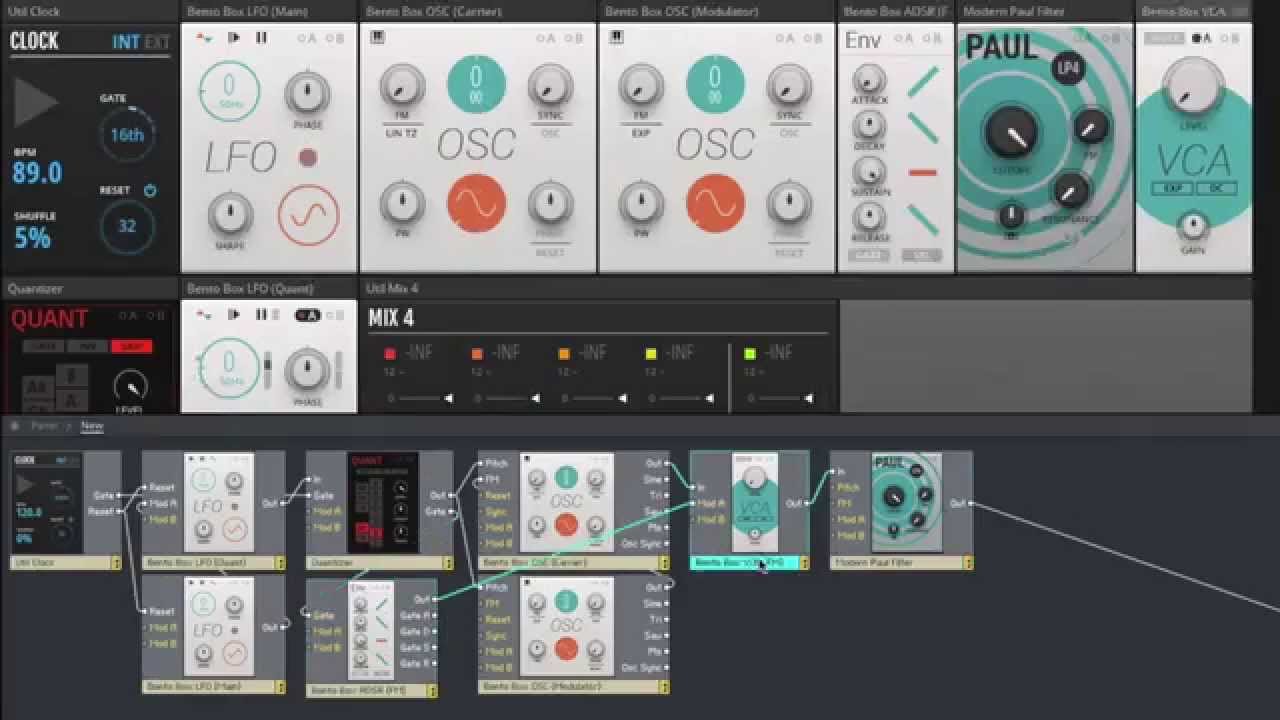 Here are a few of my favourites:. The presets cover a huge range of atmospheric Wavestation-like evolving pads, plus all manner of thundering basses and cutting lead sounds.

For those that do not know, this is a modular software instrument. It can be a synth, sampler, resampler, groovebox, fx, you name it. Think of it as a software version of a Nord Modular. It comes with modules to use and you can download more from NI's website.

OR you can build your own. It can go that deep. This is for Windows or OSX. Use stand alone or as a plug-in for your DAW. I believe this is an upgrade DVD, but I'm pretty sure that NI's software is the same with every disc and it is the serial number that designates whether it is a full version, upgrade, etc. The included upgrade serial is registerable which means it can be upgraded.

Includes DVD, case and manual. Return Window This item is sold As-Described and cannot be returned unless it arrives in a condition different from how it was described or photographed.

Items must be returned in original, as-shipped condition with all original packaging. Sell one like this. Original Asking Price: Message Seller. Add to Feed.